Is there some sort of mark-up for music notation? [duplicate]

I know on the Guitars site (soon to be merged with this one), JTab was used for rendering tablature notation (see). For those not familiar with it, tab (tablature) is a simplifed music notation specifically for guitar playing.

I know about Lilypond, which is a kind of LaTeX for music notation, but I don't think it exists in markup version for use on webpages.

"Music markup" is also of interest. Now, if they don't have one, I don't see where we are gonna find such a markup language.

Here are some Lilypond examples:

The best I can find is ABCjs, which uses ABC notation as its input. It's licensed under GPL - I don't know if that will be a problem for you.

Here is an example page utilizing ABCjs, and here are some general examples of ABC notation. It appears that ABCjs can correctly render all the examples 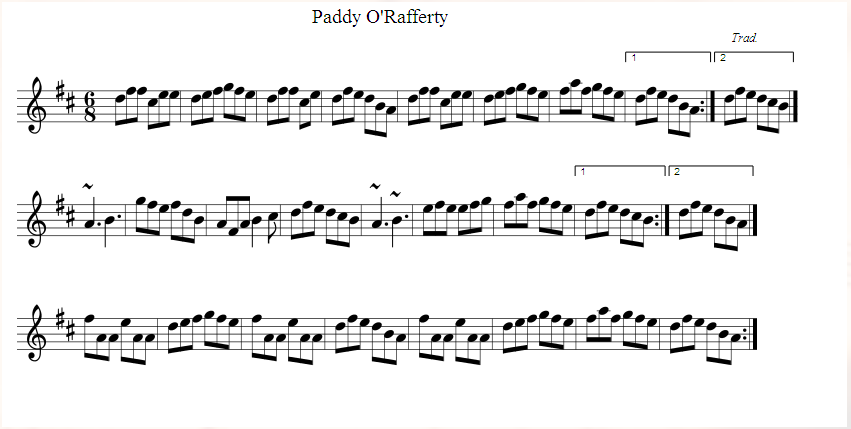 I should note (hehe) that knowledge of ABC-notation among musicians isn't as widespread as, say, knowledge of TEX among mathematicians. It would be extremely helpful to have an in-browser WYSIWYG editor to go along with this - there's got to be a free one in javascript or java available somewhere...

[Edit] Seeing how many upvotes this has gotten, I'd like to reiterate that Lilypond suggested by Raskolnikov is definitely a better solution... but it will have to be rendered serverside into a png image, not rendered clientside using javascript.

It won't be used nearly as often as the serverside TeX rendering on the math sites was, though - there it is not uncommon to see TeX notation used 10 or more times in one post, while here I would guess the average will be < 1 per post. So, I can't imagine it causing too much stress on the server.

One of the notational service available via the SongTrellis site is a Tunetext service, which accepts properly encoded markup and produces a MIDI performance and matching score expressed as a JPG image.

A Tunetext page, which the service returns in response to a request, performs the generated MIDI sequence, displays the score on the page, and provides links which package that music in a number of ways so that it can be posted on other websites. Think of this page as a factory for producing music examples.

By pressing the "Edit Tunetext Parameters" button that appears on a Tunetext response page, a visitor can customize the example for their own purposes (change the tempo, alter the instrumentation, generate color coded scores to label the harmonic or melodic intervals formed by notes and chords in the score).

Such buttons cannot be posted to StackExchange at this moment because usage of the Embed HTML tag is not currently allowed, but it might be reasonable to ask Stack Exchange developers for a way to submit such buttons to the site, if members believe they would be valuable to post.

The notation of the music is available for a viewer to manipulate for their own purposes. The music they produce by their alterations they can save for themselves and can post elsewhere.

Tunetext is especially suited for generating example harmony extremely quickly. When chords are specified in the markup using only chord names like this:

the Tunetext interpreter will automatically generate voicing for that chord list.

Here's the score image harvested from that Tunetext page:

If you issued the URL

with no following parameters, a form would launch where you could type these or other chord symbols. When you press the "Submit Score" button in this form, the specified music will be performed and the score for that music will be displayed

If it's necessary to precisely specify the voicing for a chord, a list of pitch specifications enclosed in square brackets is written after the chord name, like this:

The integers in the list specify the octave ranges where the immediately placed pitches will be placed on the staff.

The tunetext interpreter treats durations as a property of the notes, chords and rests that are being added to a score. Once a duration has been set for a note, chord or rest, it's not necessary to respecify the duration for following elements that have the same duration. The default duration assumed at the beginning of a specification is whole note duration.

would play Cmi7(b5) then F7Alt as whole note chords and then would double the duration of the Bmi(MA7) chord.

Here's a four chord sequence expressed as a Tunetext URL:

Here's a melody improvised above these chords using pitch rules that are part of the Tunetext language.

Here's the score image harvested from the Tunetext page for that melody:

I should mention that I'm the developer of the SongTrellis site and its Tunetext service. When people see specification omissions in the Tunetext language, improvements that should be made to the notation produced or in interfaces that the website provides, I'm anxious to fix such things quickly. I appreciate any feedback provided and am at your service. 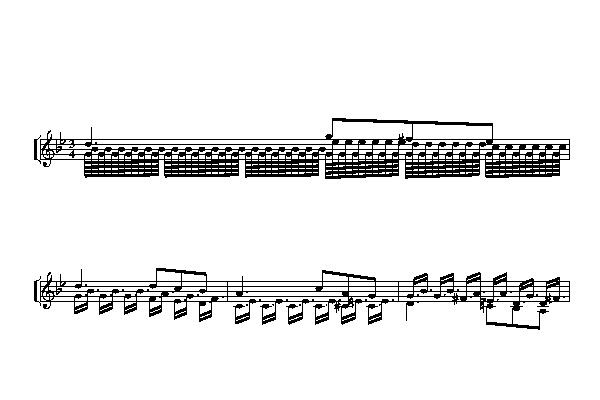 I'm still learning how to do fancy barring, phrasing and tremolos.

I've recently found MuseScore to be quite easy to use for quick examples.

Very limited use I'm sure.

Implementing a markup language for music notation for use on Music.SE is a bad idea. I say no way. Markup for music notation is way too esoteric because sheet music is much more complex than written languages. Any kind of markup notation would be useful to only a tiny fraction of the participants who spend a great deal of time learning to use it. Implementing something in SE to display music notation from a markup language would be a huge waste of time for the developers because it would practically never be used.

Those of us conversant in notation are better served by making examples in the software of our choice and then taking a screen shot and posting a .PNG.

And by the way, the undisputed king of markup for music is MusicXML, which is now owned and developed by MakeMusic (the company that makes Finale) but is made available free with an open specification.

MusicXML can be output by Sibelius, Finale, and several other professional music notation systems, and MusicXML can be used as a file-exchange format between those programs. Lilypond does not speak MusicXML, which is why I do not use LilyPond.

Not the answer you're looking for? Browse other questions tagged feature-request music-notation .

29
Should we agree on requesting ABC music markup now, unequivocally?
1
Add a staff generator capability
41
Music SE is graduating. Congratulations!
41
Suggestion: Make music symbols available to copy in to text. (♭ ♮ ♯ ♪ ♩)
30
Congratulations! Music: Practice & Theory is graduating!
28
Don't you think this music site just lacks the music itself?
10
Include listenable musical examples with posts?
14
Feature Request: jTab
5
Will a music markup language be added to Music SE? If not, then what is the preferred way of entering standard notation?
4
Should we add the instrument name to the title if a tag exists?
See more linked questions