What's the deal with the "guest" posts?

I've been active on this site for a while now, and I'm just wondering -- what is the deal with all the "guest" answers? Is this a single person who just re-registers for a new "guest" account every few days? I'm guessing there is someone knowledgeable out there who just enjoys interacting in this strange way with the site?

I've never noticed such behavior on other SE sites I've been active on. Is there a story behind this? Is this a particular user (as I assume) or a collection of people who for some reason prefer not to have more permanent accounts? A person who abandoned a registered account because they believed the system was stacked against them somehow? Or is this a sockpuppet of someone who logs out when they want to post a more blunt (and occasionally impolite) answer?

I know this may not be a significant concern, but I ask for a very practical reason that the "guest" accounts occasionally seem to reply to comments or interact, but often not. I don't know whether it's worthwhile giving feedback to these "guest" answers in the form of comments or replies or whatever. I also do believe in the SE model of voting answers up or down based on content, but there are some attitude concerns with the "guest" contributions that make me wonder whether I want to support this user with positive votes. SE seems mostly designed around the model where positive contributors are rewarded pseudonymously and accumulate reputation based on that. I'm just trying to understand how to interact with this nonstandard model for contributing to SE.

Perhaps no one knows more about this for certain, but I thought it couldn't hurt to ask, as "guest" is a pretty frequent and prominent contributor here.

Well, I've recently had an encounter on one of my questions with this guest user. I can only presume from their comments that they are fully aware of what they are doing, and likely had a poor experience on the site prior to their current incorporeal state, from the tone of their comment when I brought up this meta post (that's the link in my comment). A standard message, and a seemingly hostile reaction...

Seems unlikely that they'll start posting from a regular account anytime, but hey, as long as they're contributing, who am I to complain? 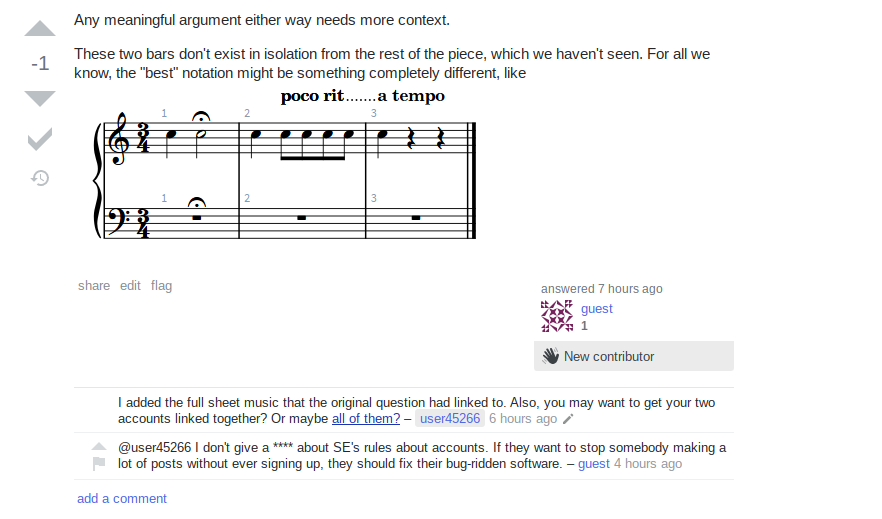 Not the answer you're looking for? Browse other questions tagged discussion answers user-accounts .

3
I've just been made the victim of a vicious character assassination in an answer
9
What happened to our chat?
2
How should we deal with questions where the answer is just 'no'?
5
What's up with this question:
3
What's the best practice regarding borderline duplicate cases?
2
An answer got accepted absurdly rapidly (Never mind, it was a proxy user troll)
12
Resurrecting REALLY Old Questions
5
Site health: Acceptance rate (how can we improve it?)
0
Can you delete my account and my personal information?
3
Should [tag:learning-resources] posts still be considered on-topic or made off-topic?